COSCUEZ: THE LARGEST MINE IN THE WORLD!

To speak of the largest mine in the world, we must first speak about “San Pablo de Borbur”, a Colombian municipality located in the Western Province in the Department of Boyacá. Also known as the “Emerald Municipality of Colombia”, San Pablo de Borbur has a history similar to that of Muzo, since its first settlers were also Muzo Indians and later, Spanish colonisers, called “Looters or Saqueadores in spanish”, who were in charge of extracting the more emeralds from this magical land.

This municipality and therefore its masterful mine called “Coscuez”, are located about 65 km from the city of Chiquinquirá, capital of the province, bordered on the north by Otanche and Pauna, on the south by Muzo, on the east by Maripí and Pauna and to the west with Otanche again.

The lands where the Coscuez mine is located, do not have the mythological uniqueness of other lands such as Muzo, but thanks to its proximity, to the northeast you can see the hill “Fura”, which according to Muisca mythology, was in principle the first woman in the earth created by God “Aré”, and just in front, you can see the hill “Tena”, the first man. Fura, in violating the divine mandate of fidelity, and Tena after killing himself, were converted into these hills.

Coscuez mine is not only the largest and most majestic on the planet, it is also the mine that produces the brightest emeralds in the world. This unique feature, together with the yellowish tone and the absence of parisite crystals, distinguishes Coscuez’s emeralds from Muzo’s, since for their other details, they are very similar gems.

The Coscuez mine occupies the second place on the podium, since in terms of Quality, it is only surpassed by the Muzo mines, but in relation to productivity, Coscuez takes first place, putting 60% of the Colombian emeralds that they go to the international market.

Having an emerald from this mine is synonymous with greatness and rarity, as it is surely one of the brightest emeralds in the world!

Our mission is to ensure that each Emerald that our clients obtain maintains a unique history from the time of its extraction, cutting and final carving.  We ensure through our company COLONIAL GEMSTONES, that all our emeralds are 100% natural fully certified, without treatments or heated.

EMERALD JEWELLERY: 5 STEPS YOU MUST FOLLOW TO BUY EMERALDS25/07/2020
Should I Travel To Colombia To Obtain A High Quality Emerald?22/07/2020
EXCLUSIVE EMERALDS ENGAGEMENT RINGS AND FOR WEDDING ANNIVERSARIES17/07/2020
WHY BUYING A LOOSE EMERALD, IS IT BETTER THAN BUYING A JEWELRY IN THE JEWELL STORE?23/06/2020
COLOMBIAN EMERALDS Vs. EMERALDS FROM ZAMBIA AND BRAZIL22/06/2020

we will assist you

EMERALD JEWELLERY: 5 STEPS YOU MUST FOLLOW TO BUY EMERALDS

Should I Travel To Colombia To Obtain A High Quality Emerald?

WHY BUYING A LOOSE EMERALD, IS IT BETTER THAN BUYING A JEWELRY IN THE JEWELL STORE?

Free The Ultimate guide to choosing the perfect emeralds in 2020 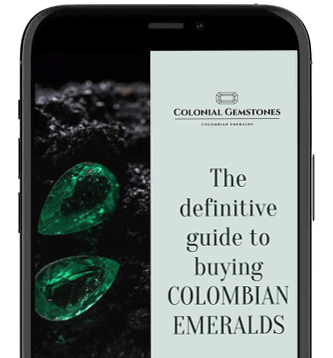